“While Paul’s Rick bass surged like an undertow, George Harrison’s double-bound 360/12 (the second one made by the company) defined a new tone at the other end of the audio spectrum. Its ringing sound embellished “You Can’t Do That,” “Eight Days a Week,” and “A Hard Day’s Night,” to name just three 12-string cuts from the 1964-65 period. Thus the Beatles created unprecedented, international interest in Rickenbackers, which many fans actually believed came from Britain.1966 rick 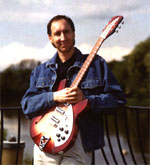 Soon Rickenbackers created the sound and image of bands on both sides of the Atlantic. Jim (later Roger) McGuinn-who bought a Rickenbacker 360/12 after seeing the movie “A Hard Day’s Night”-literally made the bell-like quality of its tone the foundation of the Byrds’ early style. His later 3-pickup 370/12 featured custom wiring, but was still for the most part an off-the-rack instrument. The Who’s Peter Townshend, Creedence Clearwater Revival’s John Fogerty, Steppenwolf’s John Kay, and many other well-known 1960s guitarists became faithful Rickenbacker users. What had been a six-week waiting period from the factory for some models became a six-month (or longer) waiting period in the mid 1960s.”   From Rickenbacker.com “The Modern Era of the Electric Guitar”

There are no reviews yet.